Shadow Directors: Key Personnel Can No Longer Hide in the Shadows

A SHADOW AND DE FACTO DIRECTORS – THE PROBLEM

With the current economic uncertainty as a result of COVID-19, many directors are closely watching the financial position of their companies. However, people involved in the management of companies should also be aware that director liability provisions, including in relation to insolvent trading, apply to ‘shadow and de facto’ directors in exactly the same way as they apply to directors who have been formally appointed to that role.

Being a shadow or de factor director can result in:

Due to the lack of official appointment of shadow and de facto directors, it is often unclear as to whether a person may be a shadow or de facto director and the analysis requires detailed consideration of each separate set of circumstances. 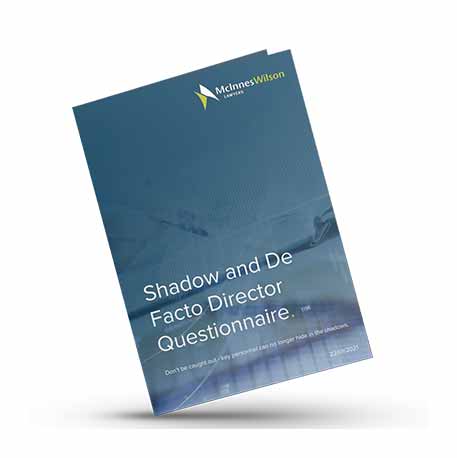 Don’t be caught out - key personnel can no longer hide in the shadows.

WHO ARE SHADOW AND DE FACTO DIRECTORS?

Section 9(b) of the Corporations Act 2001 (Cth) (Corporations Act) defines the term ‘director’ and provides that even where a person is not validly appointed as a director, unless the contrary intention appears, a person will be a director if:

(i) they act in the position of a director; or

(ii) the directors of the company or body are accustomed to act in accordance with the person's instructions or wishes.

As can be seen, this definition of director is expansive and can (and has) caught out persons who are involved in making key decisions or assisting with operations of a company despite them not being formally appointed as directors. That is, the definition catches people who are shadow or de facto directors.

However, section 9 of the Corporations Act does provide a carve out from this expansive definition of directors for advisors acting in their professional capacity or in accordance with their business relationship with a company or its directors as it states that:

Subparagraph (b)(ii) does not apply merely because the directors act on advice given by the person in the proper performance of functions attaching to the person's professional capacity, or the person's business relationship with the directors or the company or body.

HOW DID A SPOUSE GET FOUND TO BE A DE FACTO DIRECTOR?

The case of Carolyn Thomson (Mrs Thomson’s Case) provides an example of the type of everyday type of situation in which the courts may find that the spouse of a director of a company is a de facto director of that company.

Mrs Thomson’s husband was the sole director of Kadoe Pty Ltd (Kadoe), which was a small proprietary company that carried on a waterproofing business. Tremco Pty Ltd (Tremco) was the main supplier of Kadoe, however, Kadoe ceased paying their invoices. Tremco commenced legal action and, following Kadoe failing to comply with a statutory demand, Kadoe was wound up in insolvency on 29 April 2015 and liquidators were appointed. Kadoe’s debts to Tremco remained outstanding.

Mr Thomson became a bankrupt in June 2015, such that Tremco was unable to personally pursue Mr Thomson further for the unpaid debts. The liquidators of Kadoe gave consent under section 588R(1) of the Corporations Act for Tremco to sue Mrs Thomson personally under section 588M of the Corporations Act on the basis that she was a (de facto) director of Kadoe and Kadoe was insolvent, or became insolvent, at the time that the debts owing to Tremco were incurred.

The factors that made Mrs Thomson a de facto director

Despite Mrs Thomson’s arguments to the contrary, the Court held that Mrs Thomson was a de facto director at all relevant times. In reaching this decision, the following factors were considered:

The impact on Mrs Thomson’s assets

The finding that Mrs Thomson was a de facto director of Kadoe had dire personal consequences for Mr and Mrs Thomson as the family home, which had been placed in Mrs Thomson’s name for asset protection purposes, was subsequently sold to pay the debts owing to Tremco.

WHAT SHOULD COMPANIES AND KEY PERSONNEL BE DOING NOW?

We recommend that all companies and key personnel who assist, advise or manage companies but are not formally appointed as directors should consider the level of involvement they have in the business and the unintended consequences this involvement may cause.

In particular, key personnel should consider whether this may jeopardise the effectiveness of their asset protection strategies.

Additionally, we consider that persons who are involved with management and operational decisions and activities of small companies that do not have internal governance policies and processes in place may be at a greater risk of being found to be shadow or de facto directors.

If these circumstances apply to you, such that you are at risk of being considered to be a shadow or de facto director, we recommend that you comply with all director’s duties under the Corporations Act to avoid potential personal liability.

HOW CAN WE HELP YOU?

McInnes Wilson Lawyers can help you by:

If you require assistance or any further information please contact Taryn Hartley or Amy Grove. 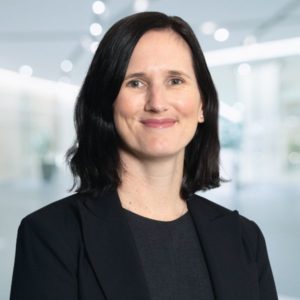